Western Australia is boarded by the Timor Sea on the north – where 39 foot tides rush in faster than a person can run! On the south is Southern Ocean – the famed “Roaring Forties.” The west coast meets the turquoise waters of the Indian Ocean. Think nearly 2,000 miles of turquoise waters lined stunning beaches. Think million acre cattle stations, immense wheat belts, and scorching dry deserts like the Great Sandy.

Famed bush poet Henry Lawson described it best:“there are no mountains out West, only scratches on the floors of hell.”

The Kimberley is where the movie, Australia, was filmed – although the story is set in the Northern Territory. Viewed from above, large swaths of it look like an ancient sea bed — and so it was. The best, if not the only time to visit is May through October.

Eastern Kimberley is a short flight from Darwin to Kununurra, a quite new city built when Lake Argyle was constructed to support agriculture. Station managers come to Kununurra to buy everything you’d need on a cattle station. From here you can visit the Argyle Diamond mine – the largest industrial diamond mine in the world; Purnululu (the Bungle Bungles), and lovely Emma Gorge, and luxury cattle stations. While Aussies come to drive the infamous Gibb River Road, no car rental companies allow renters to drive the 400 miles of bone-shattering washboard road. But we have small group 4WD tours that take the journey.

Western Kimberley’s main city is Broome. Over a century ago it became the pearling capitol of the world. The seas held the giant Pincatada pearl oyster – perfect for making “mother of pearl” buttons. Then plastic buttons were invented, and pearling died. The first telegraph cable to Australia from Indonesia reached Broome in 1889. It was heavily bombed by the Japanese in World War Two. For decades Broome slumbered. But today, this is where most of the world’s cultured pearl farms are, producing what is sold worldwide as “South Seas Pearls.” Broome is also a mecca for Aussies seeking warmth when it is cold in the south.

Karolyn fell in love with Broome’s colors: red sand beaches and emerald green mangroves swaying in the turquoise waters of the Indian Ocean… wow! We try to plan trips to coincide with the Staircase to the Moon, which happens when there is a full moon with a low tide. A “must” here is to ride a camel at sunset on Cable Beach. You’ll find a top notch Aboriginal art shop here, various tours in the waters, and the famous Sun Pictures, the world’s oldest “picture garden” still in operation.

One favorite day or overnight trip is to go north up Cape Leveque. See the famous pearl shell alter at the Catholic mission at Beagle Bay, visit the Aboriginal community of Lombadina, and stay at Kooljaman Resort, where you can sleep in your palm frond shack on the beach, or in a motel.

West of Broome, there are gorges to explore. Southwest of Broome, self-drivers can hike in the Karijini Ranges. We can also plan itineraries to include visits to Aboriginal outstations where a lot of contemporary art is being produced.

This area is roughly halfway between Perth and Broome. Easiest access is by flight from Perth. 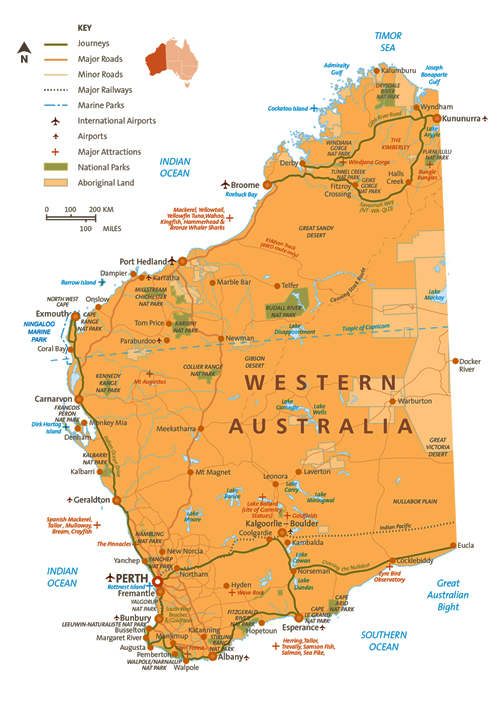 Shark Bay is a two-million-acre World Heritage site whose primary significance is the stromatolites in Hamelin Pool. These are considered to be the earth’s longest continuing biological forms. The algae form colonies near the shore. There are also 3.5-billion-year-old fossils of stromatolites in Marble Bar – way out in the deserts of Western Australia. But most travelers come to see the bottlenose dolphins at Monkey Mia. And you can feed them!

Ningaloo Reef, a bit north of Monkey Mia, Ningaloo is “Australia’s other reef.” Divers come between mid March and mid July to swim with the whale shark – the largest fish in the world. Other times of year you can see humpback whales or sea turtles. Since the Reef is only a few feet offshore, you can swim out to see these and other corals and fish – or take a boat tour to snorkel or dive.

Perth and the Margaret River Region

Perth has been called one of the most livable cities in the world. Its stunning beaches inspire a relaxed lifestyle. Visitors enjoy the thousand-acre Kings Park and Botanic Garden, which has wide lawns with great city views, bushlands, and wildflowers in season. Travelers take day or overnight tours to Rottnest Island to see the quokkas – yet another interesting marsupial.

Margaret River area is known for fine wines, but there is much more. Drive south to Bunbury, enjoy a dolphin cruise, and continue to Dunsborough — where the Indian Ocean meets the Southern Ocean. Walk through wildflowers on the path to the lighthouse – and with luck spot migrating whales and New Zealand fur seals. Drive Caves Road to visit craft shops, vineyards and the national parks. Make a picnic with local wine and cheese, or lunch at one of the top vineyards. Leeuwin Estate vineyard has an excellent art gallery of modern paintings and furniture. Drive the Giant Karri Trees Loop and visit the historic Ellensbrook Homestead, built in the 1830s. Travelers with more time can continue east to Albany and Esperance, north to Kalgoorlie, and then back to Perth. True bush country!

If you drive northeast of Perth past the Swan River area, continue to New Norcia, a Benedictine monastery started in 1847, now the only monastic town in Australia, with a quaint old hotel. Pick up a “Heritage Self Drive Tour” map and try to find the original Rabbit Proof Fence. (The movie by that name was filmed in the Flinders Ranges of South Australia.)

Head back west to the coast, passing small national parks with a huge variety of trees, bushes, and tiny ground flowers. Near Cervantes, you can see a small colony of stromatolites and visit the Pinnacles – interesting rock formations.

Experience the Beauty of Western Australia

EDUT creates an itinerary to suit your wants and needs.
Let us know what you want included in your Australia vacation.